With the amount of lottery applications on the Google Play Store nowadays, users are spoilt by the availability of many apps, some of which are fantastic and others that are anything but. One lottery app that falls more into the latter category is Lotto (645) Wizard. In this Lotto Wizard Android app review, we will be looking at what features this app has to offer as well as how well it performs on what it promises.

While it may not be clear at first what the features of Lotto Wizard are, the app is first and foremost a random number generation application. After selecting as many lucky numbers as are required by whatever lottery you have chosen to play in, the app will give the option to either manually or automatically select a board number. Following this, users are able to select an ‘exclusive’ number. Again, this can be done automatically or manually. While we can gather that the ‘exclusive’ number will be the power number in your selection, we are at a loss as to why users are required to select a board number, as it seems to have no impact on the final results.

Once all parameters are selected, the app will display a list of randomly generated numbers that the user can then use to play in the lottery they selected. This, however, leads to some confusion as to why you are required to select numbers when the app generates random number lists.

The one thing that must be said is that the number randomization algorithm in Lotto Wizard is actually quite good. In a number of test generations that we ran, the numbers were always far different from the previous randomization numbers. This means that users will receive proper randomization results and can rely on the algorithm to give unique numbers to play each time they generate a new set of numbers. 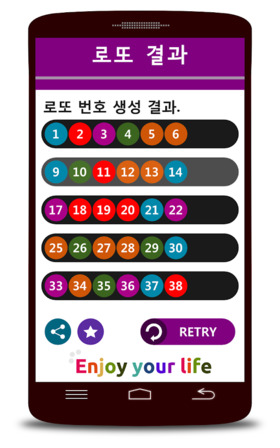 As stated above, Lotto Wizard is primarily a random number generator. In fact, that is all the app is. There are no additional features to mention at all other than the fact that once users have generated a list of numbers they are able to share these numbers using Android’s built-in share feature.

Separate to the sharing ability, the only thing that users are able to do (other than opt to generate a new list of random numbers) is to rate the app.

There are no specified lotteries available on the app. Since it works as a generic lottery number generator, it is not specific to any lottery.

For such a simple application, one does not expect anything complicated about the user interface, and this is abundantly true when looking at Lotto Wizard.

When launching the app, users are presented with a welcome screen that simply offers a ‘Start’ button which allows for random number selection to take place. Other than that, the only other options is to share the app, see the developer’s page in the Play Store, and rate the app.

The design and colouring of the app are, however, well thought out and striking. The contrasting colours are easy on the eyes and make it easy to see what is happening. The app is also relatively responsive and responds well to being forced into full view mode on modern smart devices.

Lotto Wizard thankfully does not offer any ads on any of its pages or while navigating around the app. This could be due to the fact that the developers are relying on app reviews rather than ads, considering that the ‘Rate Us’ button is prevalent on almost every single screen of the app.

While it does offer a rather decent algorithm for random number generation, we are confused as to why users are first required to select numbers from a list before viewing generated number lists that are completely random and contain numbers that were not even selected.

The algorithm in this app has a large amount of potential. Unfortunately, this potential cannot be fully utilized by an app that is confused about its own sole purpose. As such, Lotto Wizard has a long way to go before we could even think about recommending it among our favourite lottery apps.

Double your chances: Get a 100% bonus on your first purchase plus 5 free Gold Lottery tickets!

Buy one lotto ticket from LottoKings and get the second one 100% free!

Sign up with WinTrillions and save 90% off the US Powerball!

Register with theLotter and save 10% off your first purchase!

Get Up to 20 Free Lottery Entries with this PlayHugeLottos Welcome Offer!